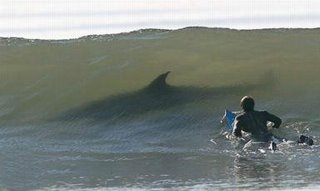 Good luck to our ExPat Shark Brandl and the rest of you extending Shark-dom into Europe! I wish you well and am proud to have served as a source of inspiration, both through my paintings and my critical forthrightness.

A few of my last little soirees on Sharkforum Central came with the realization that what was necessary, was for me to do what I do best, and that is clear the water. By which, I mean I have felt it necessary to address any number of false ideas about myself (called The Shark), my likes and dislikes and, discuss for a moment just exactly how it is the "regional" art world functions -- in all of its raging dysfunction that is....time for a little chalk-talk. I have adapted some of these considerations here from my discussion of them in US regional spots, especially Chicago, to the Swiss artworld, from what I have heard about it, from some people here, and primarily from Mark, our Theory Shark. But these are all MY ideas, not his. You have to talk to him about his.

The first thing for any artist there to realize is what a completely second class citizen he or she is in the grand scheme of things....that is, being from a "regional," provincial area is a huge detriment to the following:

a.) being taken seriously as an artist (especially if you stay there and don't migrate to another country, or at least do the typical claim to be living in BOTH "St. Gallen and Berlin" or "St. Gallen and Los Angeles" "Zurich and Paris" or wherever else you really just went to on holiday),

b.) being collected at home by major institutions

c.) being collected by top-tier collectors in your area.

We, dear people, are summarily dismissed with barely a flick of the wrists by Consensus Curators and Wanna-be Power Brokers. Their hands are free to do so, as they employ (as all kids-on the-go smart/jet set art mavens do) the ubiquitous shoulder bag style satchel --I mean, you really cannot leave the country without one! Understand, what this accruement allows, is an implicit understanding that today's curator, "Vermittler," as they wish to be called in German, -- far from being art's care taker, or from actually "delivering" art -- is more of an Art Star Tourist... a middleman crisscrossing the globe in an endless, never ending vacation/'journey' to satiate the bottomless pit of need for culture that emanates from these creatures -supposedly outward from these "Vermittler"...

What is key to understanding where we as artists stand is this: local collectors (in your case, probably meaning collectors in almost the whole of Switzerland, but definitely in the "Ost" or "West")-- in particular the most affluent influential ones -- are for the most part deeply concerned with appearing hip and up-to-date in their collecting -- as seen from New York City. The last thing any of them wants is to be seen as a podunk from the Province -- which, if you think about it explains the following:

a.) Why art movements and artist groups from your region have been pretty much greeted with an embarrassed silence, (please note, as I am certain is the case, the local plutocracy attempting to separate themselves from the hoi polloi -by barely acknowledging any mid-career or later artists such as Oertli, Hans Schweizer, Lucy Schenker, etc.). Where is the Walter Burger hanging at the museum ?

b.) Most major collectors do it (collecting) elsewhere – NYC, Zurich, and the art fairs, and for home just surrender their judgment over to "pundit" people (who are thinking what are the "correctly connected" youngsters in OTHER Swiss cities doing this week?) – Usually having interest in those "artists" who specialize in presenting a kind of watered-down and dumbed-down version of what was hip in Chelsea several seasons ago.

c.) Rather than allow YOUR area to be a place with its OWN vision -and allowing that vision to compete in the marketplace of ideas nationally and internationally, these people have created and supported a vapid, even pathetic imitation of what is considered current and viable -- in terms of its hipness factor out on the inernational circuit, emanating for the most part from NYC, or perhaps in your area the NYC-accepted Documenta clique. Thus, condemning us to a school-kid version of last years trends passing itself off as an art scene. We should be better.

d.) Artists need to understand that when you see that shabby piece of Neo-Conceptual work -- or a large, bland, limp junk installation or a stolen style / seen it a million times type academic text-work / - the reason why it is hanging where it is, has nothing to do with its actually being GOOD -but, signifies that Those In Charge have influenced one of several collectors (-- who themselves are quite sure they are the "Qualified" -- not only as purveyors of Napoleonic complexes and silly fawning over rich gallerists, but arbiters as well, of what art is important in your area) -- to buy and support this work.

Which, leads me to the point of this particular commentary: if its not too much to ask then, aside from having "Steuer" (tax-payers') money, sometimes some money of their own, what exactly are the qualifications these modern day de Medici's possess in the realm of aesthetics?.... minor academic degrees, probably, and an ability to brown-nose the right "connections."

And last, a quick note for those too thick to figure it out or, those who promulgate a one-dimensional understanding to The Shark's, or any other serious artworld-critical-Shark's, position: I, The Shark nether oppose nor promote any one kind or type of art or way of thinking about art. The Shark has a problem with the institutionalized art world, and, with the political thuggery and academic aggression that has been inflicted upon a wide array of artists here in Chicago, and in other parts of the world -- undoubtedly in your area as well -- by a chosen few. Also, The Shark happens to believe and think that most of this select group of "creators" are more minions, 'pets,' than they are very good artists -- safe to take to dinner parties, easy to tell what to do, never rebellious, always fawning and feigning ignorance -- as safe as it is to hang their mostly bland work (with much talk of great import hovering around never to be seen or anywhere in evidence in the work itself)..... For a moment...think about how much more interesting and challenging so much of the work is that you see in studios of artists you know IN YOUR AREA, better work than the homogenized --got one in every mediocre show in the country-type-stuff dominating "Kunsthalles" and the like now... Shouldn't the ARTworld be for ART, for ARTists? How did this situation happen? Think about it-- instead of some poor facsimiles of 'what was 'hot' 15 years ago, we artists have far too quickly THROWN away our own voices -or, they were thrown away for us.

It is great to have Wesley, aka "The Shark," write a piece for us. As usual, it is highly aggressive and will certainly be controversial. He does raise some very important questions, in his take-no-prisoners mode. What do you think?

Welcome to the world of milk and chocolate - where discussions seldomly take place in the open...
Welcome to switzerland...

Thank you very much, The Shark, for your open comment, for that is just the situation, that hits us every where we go.

Being german and blessed with the devil's sign of the typical german outspokenness, I could see these developments so often.

One thing that I experienced especially in Switzerland is, that many regional artists don't want to play a role, apart for their small area they work in.
And what is even worse, they tend to ignore everything, but the work done in the region - what leads to a competition of provincial ranking in "who copies best the big ones" - one thing we might experience again in a nicely done "museum and kunsthalle show" this winter in St Gallen.

I studied art in Kassel - the very provincial centre of art. Besides of the big event every five years, this town needs its beauty sleep in between, because apart from the big run of the art world during documenta times, there is nothing much left to do: no money, no visitors, no collectors anyway.
In art school I was stunned to see every five years a nice and neat copie of the big event in our main show. Every bit of cool nastiness, or every new idea was taken away for the show during documenta year, followed by the hope of every student, to be seen and to be taken into the big world...

...and here I see the other bad habit of artists: that is what I call the big phlegma.
Sitting by the stove in a small studio, working along and feeding hopes for the moment, when the famous galerist, the wealthy collector or Mr. Museum knock on their door and cry out:
MY GOD, THAT IS THE ART THE WORLD WAS WAITING FOR!

Best is: Ignore them all.
And start to initiate other possibilities for art to be shown and discussed!
That's my opinion.