The fields of religious and Islamic studies have suffered a great loss with the passing of Th. Emil Homerin in Rochester, New York, on December 26, 2020. Those who knew him personally will always remember his generosity, kindness, and insights. To this lucky group, we must also add all those who read and benefited from his sensitive and thoughtful work on Sufi poetry over the years. Taken as a whole, we will all miss his ability to convey some of the most complex and lyrical aspects of mystical thought through his brilliant translations and analyses. Th. Emil Homerin was truly one of a kind; a humanist to the very core.

Homerin was born in Pekin, Illinois, in 1955. Already as an undergraduate, he developed a passion for the academic study of religion, especially mysticism. At the University of Illinois at Urbana-Champaign, where he completed his BA degree in 1977 before completing an MA there the following year, he chose Indo-Iranian mysticism as his area of concentration. He subsequently ventured to the University of Chicago's Department of Near Eastern Languages and Civilizations where he focused on medieval Arabic mystical poetry, a subject that remained dear to his heart throughout his scholarly career. In 1987, Homerin was awarded a PhD with Honors for his dissertation “Filled with a Burning Desire: Ibn al-Farid—Poet, Mystic, and Saint,” which he completed under the supervision of Professor Jaroslav Stetkevych.

Best recognized for his astute renderings of Arabic mystical poetry into English, Emil showed an extraordinary skill for connecting two of the most difficult and personal forms of expression—poetic language and mystical experience. He did so with such ease and sensitivity to both aspects that reading his work transports us on a seamless trajectory into the distant and private worlds of his poets, male and female. From the classical themes and common cultural topoi rendered as the spiritual journey of the 13th-century Egyptian poet-saint Ibn al-Farid to the devotional passion of the 16th-century woman mystic Aisha al-Ba’uniyya, Homerin presented us with equally lyrical and subtly analytical engagements. Only a profound humanist can accomplish that.

Emil’s intellectual interests were wide-ranging. He studied cemeteries and in the University of Rochester's Department of Religion and Classics he taught courses on the American spaces that commemorate death. He took his students to the historic and beautiful Mt. Hope Cemetery to understand how these spaces of death give life to the individuals and the societies that built them. He used to pepper his stories about cemeteries with examples of posthumous humor, epigraphic thrill, as he discussed their architectural artistry and got his students to admire their natural settings as though they were botanic gardens. Perhaps this interest in cemeteries helped him deal with his own mortality. During his brief illness, he reminded us that life and death are cyclical phases, caught up in a dynamic that should not be feared but accepted as we do day and night and the changing seasons.

Emil joined the faculty of the University of Rochester in 1988, after stints at DePaul University and George William College in Chicago and Temple University in Philadelphia. At the time of his death, Emil was the author of seven books, one edited volume, and countless articles, book chapters, and encyclopedia entries. In addition, he was an award-winning teacher, astute administrator, and a first-rate colleague.

He also had a passion for many other topics, from comic books to Biblical exegesis to supporting the local arts and music scene in Rochester. In all of his diverse interests, he looked for, and found, connective threads among different people, cultures, and history. For Emil, the pleasure was in detecting links while always acknowledging a right to be different.

Emil’s most passionate interests were found at home, with his lifelong partner Nora, whom he married in 1977, and with his two sons, Luke and Elias. During his research and work, Nora was always present as his main support and greatest love. Everyone who knew Emil will fondly remember how his eyes lit up at every mention of Nora. Colleagues and students at the University of Rochester will remember with fondness Emil and Nora’s famous dessert receptions held at their house for graduating seniors and their families. Not active on social media, Emil preferred his privacy, writing his own poetry of life at home, with Nora, and tending to daily chores and their vegetable garden with the same passion as he did with obscure Arabic expressions.

Emil has surely brightened up some other world with his arrival and has left ours a bit colder and darker. His memory and his writings remain with us for always.

Posted by Mark Staff Brandl at 8:24 PM No comments: 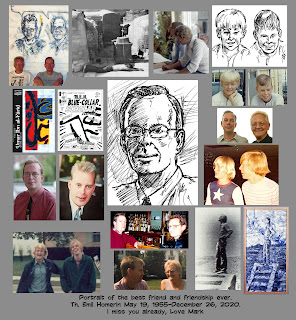 THOMAS EMIL HOMERIN.
My greatest friend, from my whole life, died yesterday. Dr Thomas Emil Homerin. Born on the same day as I was, May 19, 1955, we were self-declared best friends from childhood till now. We have collaborated on numerous reviews, articles, comics, exhibitions, involving art and mysticism. Including, I did a painting to serve as the cover of his book 'Umar Ibn al-Fārid' for Paulist Press. He is most famous as a Professor and Chair of the Dept. of Religion and Classics at the University of Rochester, and taught classes on Islam, classical Arabic literature, mysticism, funerary symbolism, and more. 7 major books and too numerous, important essays to list. The most recent book, a real discovery, on the mystic woman, Aisha al-Ba'uniyya. He was a true genius, a good human with a big heart, and the hardest-working person I have ever met. The "Blue-Collar Scholar." I will add more thoughts later and a real eulogy. I am too heartbroken now and sad for his wife Nora. Bless his soul. Th. Emil Homerin, May 19, 1955 - December 26, 2020. God, I miss you already, Tom.
A tribute slide show video I made for hios memorial for at The University of Rochester, as I could not fly in due to the Covid situations. https://youtu.be/fSdpV78ML-w
Posted by Mark Staff Brandl at 1:22 PM 1 comment:

Posted by Mark Staff Brandl at 2:50 PM No comments:

Posted by Mark Staff Brandl at 2:41 PM No comments:

Posted by Mark Staff Brandl at 2:26 PM No comments: