Artist and theorist C Hill has recently created a new term to give a clear identity to a new artistic phenomenon. The appellation is gallery comic. The second expression, iconosequentiality, is my own creation for a compositional form concomitant with gallery comics.

Hill, a French-American artist living in California (here), explains “gallery comics” as artworks using the formal structures of comics to create pieces that are intended to be viewed in the context of a gallery or museum or Kunsthalle or other (fine) art space --- whether hanging on a wall (a la painting), sitting on the floor (a la sculpture) or as an installation (a la – well, you get it). A gallery comic is not necessarily, or at least not exclusively, meant to be read left to right, top to bottom.

This idea of “gallery comics” is open to variety of applications, from Hill's own clearly comic-derived, fairly narrative yet iconic works; Andrei Molotiu (here) or Mathieu Baillif's (aka Ibn al Rabin here) abstract comics; or my own painting-installation works. Hill asserts that this new format is not restrictive, but rather inclusive, therefore non-reductive and non neo, creating the perhaps first truly post-modern (with hyphen, as in after-Modern and after-Postmodern) media concept. Thus, for Hill, a gallery comic (or art-space comic, or Kunsthalle Comic, Museum comic, et al.) is a challenging new form of art lying between book-based sequential comics and the spacial / wall situation of fine art. That is, a sequential, or quasi-sequential work which both can be read like a book and comfortably viewed as a gallery/museum work. I have used the term, yet also prefer the variation 'exhibition comics.' 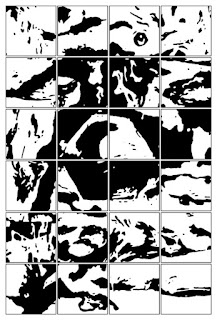 
"As comics become both more acceptable in the fine art world and more mainstream in general, the idea of seeing comics hanging on a wall in a museum or gallery becomes ever less unusual. ... Hung on a wall these works of art become defamiliarized and slightly uncomfortable, placed out of reach. We can look but we can’t hold and read. We can still view them in the traditional reading manner, left to right, up to down, but in a distinctly different way than one approaches a painting or print on a wall. (They hover somewhere between the page and the wall.)"


Moliotiu points out, however that "the 'original' art pages of comics offer wonderful opportunities for different and unique forms of appreciation on their own." Exhibitions and the collecting of comic art, both very recent events, have brought about a new interaction by viewers with such original comic pages, allowing us to discover how one can appreciate not only the intended art values, but also additional discoveries such as the beautiful variety of thick and thin, tapering, brush ink work common to older cartoonists, the thickness of the ink on the board, the "palimpsest of marks that do not show up on the printed page: touches of pro-white and of [non-reproducing] blue pencil, ghostly pentimenti of erased penciling, marginal notations," fingerprints and so on. As Moliotiu further states, "these marks reveal the inescapable presence of the artwork and the comics-creating process itself." They are what Molotiu calls the "antilogocentric dimension."

This, together with new desires for fine art critical of anaemic and attenuated art consuetudes, as well as the arrival of several generations of artists who grew up, cherish and wish to merge vernacular and fine art approaches, has led to a new variety of art, which Hill now seeks to name. (Whether this is a genre, a medium or a technique I will discuss in another, following article/blog. Furthermore, I will examine the term gallery comics itself --- the pros and cons of other possible monikers, such as installational comics, object comics, sequential fine art, and others.) 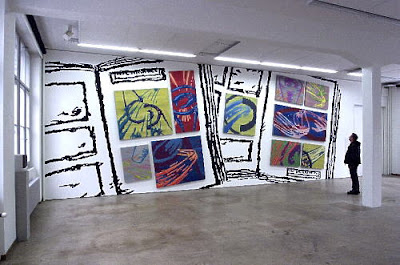 Now we come to our second newly-minted word, my own iconosequentiality. This is my neologism, for the unique combination of forms of phenomenological perception in comics — and my art. While I have previously mentioned this idea elsewhere, I would like to publicly re-introduce it here and link it to gallery comics.

In comics as we know them, viewers frequently perceive both the entire page as an iconic unit, similar to a traditional painting, and simultaneously follow the flow of narrative or images from panel to panel, left to right, up to down. A page is often thus concurrently whole/part and openly linear (even multi-linear with the possibility one has to glance "backwards" and "forwards" if desired, while reading). Readers of Sharkforum who also read contemporary comics should be able to conceive of this well --- the beautiful Building Stories by Chris Ware (here) are prime examples of iconosequentiality (but not "gallery comics" until they --- soon --- pop up in an MCA show curated by Lynne Warren).

Such a work is therefore ontologically as well as phenomenologically both iconic and sequential. Aesthetic attention becomes a wonderfully anti-purist conceptual blend of, or perhaps flickering between, a rich variety of forms of reading and viewing, most of which are under the control of the perceiver. The ultimate hyper-text/hyper-image united with the joys of an image's patient always-there, self-reliant presence


This is not a reiteration, by the way, of Werner Hofmann's iconosase, in French, which would be iconostasis in English. This notion, as applied by Andrei Molotiu to comics, describes the phenomenon where pages of sequential storytelling occasionally "freeze" into tableaus of panels that make a rather unified whole. This occurrence is indubitably the source of inspiration for what I am proposing, yet is almost the mirror image of what I seek to describe. In iconostasis there is a natural progression which has been slowed down, even stopped, often almost by accident, for aesthetic appreciation. Iconosequential work is the conscious, active, creative use of the marriage of iconicity and sequentiality as an a visual stratagem, a "speeding up" if you will. These ideas in practice of course overlap, however the clearest simple examples I can describe would be wonderfully composed pages of panels in Steve Ditko's Spider-Man, iconostasis, as compared to Frank King's famous Sunday strips of the children playing at a house building site, iconosequentiality. Those delightfully choreographed pages of struggle drawn by Jack Kirby seems to fall exactly in-between. 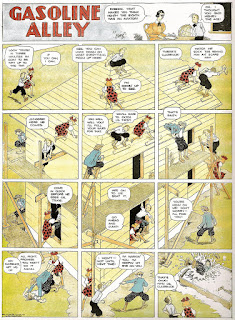 Noticing and using such a new compositional form is important, if not for personal utilization then at least for debate. In addition to a blanket ignorance of the complexities of vernacular and popular art forms, one of the detriments in the artworld of the recent past has been the slow-but-steady erosion of knowledge about and interest in painting. Such blindspots have resulted in an attendant attrition of awareness of some startling accomplishments in method and thought in those disciplines, especially painting. There are many other elements which need to be newly considered, such as the integration of a "media" awareness, as displayed in David Reed's filmic-brushstrokes (here), however I will discuss only one in this blog: composition.

David Reed, #611, 2010-2011
24 x 120 inches
Oil and alkyd on polyester oil and alkyd on linen
Composition IS important. The agonistic struggle to achieve new types, even if they are at first seemingly rather small alterations. The history of changes in composition shows this --- transformation is crucial, not due to any supposed development of "significant form" or due to a blinkered view of some march of history, but for personal metaphoric use.

From the conceptual hierarchies of early art, to the overlapping levels of Medieval art, from the Golden Rectangle and Triangle of the Renaissance, to Mannerist routines, from the Baroque spiral-into-space, to Rococo curlicues, from Neo-Classical and Romantic asymmetry, to the shocking yet "relational" composition of early abstraction, from the all-over of Pollock, to unitary Pop and Minimalist form, from Neo-Platonic yet temporal Conceptual art systems, to the environmental envelopment of installation, to now — the tackling of the practical and philosophical problems of composition in art (especially painting) has been an impatient, vital, combative struggle.

Let me emphasize, anti-Formalistically, that this endeavor to forge new compositional tools is significant not in order to simply form novel conventions, but to move on to distinctive organizational structures, new tropes useful for the embodiment of arisen desires.

And now more than ever, we need methods reaching beyond the affected Duchampianesque maniere of Postmodernism so far; one for our new critical anti- purism. Iconosequentiality can be the central compositional trope we need. The new "working space" for which Frank Stella has called.

How and Why, concretely? Such a factor determines the specific modes of attention which visual art now needs — especially the reading/viewing amalgamation true of gallery comics as well —and which make such works potentially far more radically liberating in form than many traditional or even most so-called new media.

Iconosequentiality has the inherent predisposition to be tropaically democratic. It is also a step beyond Pollock's revolutionary "overall" composition, while embracing that discovery, as well as its child, installation, and not retreating to relational balancing games or Neo-Conceptual "readymade" knock-offs, both of which stipulate hierarchical metaphors I find repulsive.

C Hill’s Stars, Crosses & Stripes is one such “gallery comic.” It is an object and a comic which Badman accurately describes as "visually and emotionally powerful through the combination of its iconic starkness, repetition, and text/image interaction. It spans the comics and fine arts world, coming out as an interesting experimental comic and a work of fine art that is both understandable by anyone and aesthetically pleasing." Badman's review of the work and a link to an image are here.

An informative interview with Hill about gallery comics is here.

His Stars, Crosses & Stripes is here.

Mark, I really love how the painted pages and the paintings work together in your installation and your idea for gallery comics. It leads me to think that it would be cool to do that elsewhere, using proofing marks. Take a room and mark up on the walls to add space, remove space, make larger or smaller, delete and so on to the objects in the space and on the walls. This concept could be applied to public spaces as well in the form of graffiti. The instructions left behind not only gives a commentary on how everything looks, but instructions (or opinion) on how to improve it. I don’t know -- kind of a tangent, but your work makes me think and not just take it in. I guess that’s what makes great art.

Actually a bunch of us come to the gallery comics idea independently --- me through uniting painting with installtion and my own influences, others other ways. However, the credit for "nailing it down," for really inventing the term,m solidifying the concept and promoting it goes to Christian Hill. Hill's own conception is more of an art-object-comic, but he has sought out, invited me to the CAA conference and promotes us all. There is even a new blog just starting about the idea at http://gallerycomics.blogspot.com/.

While your idea of using the evices of print technology in an installational sense is not, pers se, a gallery comic, not using the defining characteristics of comics), it is a wonderful idea! Go ahead and do one! I believe it could be a very delightful, humorous, slightly Twilight Zone, but also very critical approach. You could add editors/proofreaders marks and art editors directions too! ("The delete sign next to a window, etc.)

As a working artist for comics, I hope our artform, even as it is, gets attention by the fine art world. However, I also think your expansion of it, Mark, is a thrilling idea. (I have seen your work live.) Keep it up. Sorry about the anonymous thing here, but I'm feeling shy in the face of all the artists here......
Posted by Mark Staff Brandl at 7:03 PM