A Podcast Blast from the Past, Harry Bouras 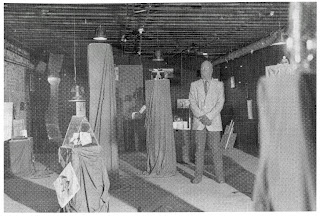 Way back in 1982. "Art and Artists," Harry Bouras on WFMT about a Brandl exhibition.

One of the most unique, yet most insightful reviews I have ever had of a show of mine. This installation was described by the New Art Examiner in their Guide to the Galleries as a "fine requiem for "personal" art ... poignant yet powerfully uncompromising " and as the only non-trite use of Raw Space in 1982. It was the basis of change from Late Conceptualist to the expanded painting installation combinations I do today.


It can be downloaded here.

Harry Bouras, b. 1931; d. 1990, was a sculptor, calligrapher, painter and collagist. He was also the art critic for WFMT radio; Chicago, Ill. For 25 years, he hosted "Art and Artists" (originally called "Critics Choice"), a weekly radio program on art criticism on that channel in Chicago. He was artist-in-residence at the University of Chicago from 1962 to 1964, and at Northwestern University from 1965 to 1967. He taught at Columbia College in Chicago from 1964 until 1989. He was a frequent lecturer at colleges and universities and published numerous articles on art and literature.