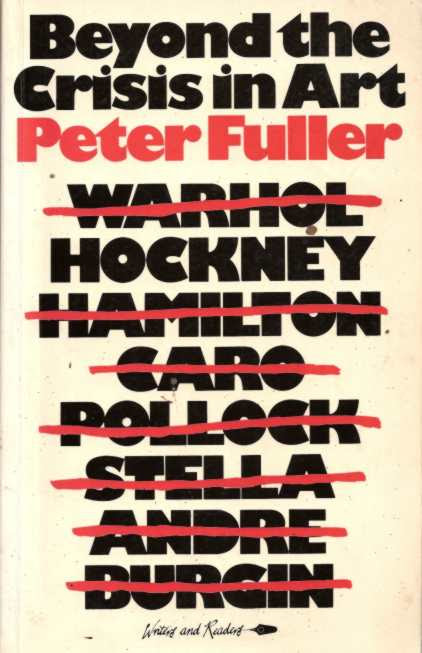 I have long been a fan of the Sharkforum and resident artist/critic Mark Staff Brandl's take on the present state of art criticism.

This is by way of a practice run to 'scope' the afore mentioned 'art criticism now?' agenda :-)
I love that word 'scope' you'd think we were shooting bears..maybe we are...certainly foxes...

His latest project involves asking artists to write about their practice and its theoretical basis as a challenge to the current curatorial/academic mish mash that sometimes pertains in the IAW (international art world). He (I think correctly) cites the current fashion orientated dealer driven art world as suffering from a 'glossies' approach that has jettisoned the baby with the bathwater and quite correctly identifies a gap 'in the market' (how loaded that phrase has become in the past 30 years) where artist's voices have become swamped in other louder discourses. Usually these discourses are tied hand and foot to financial and kudos driven 'standing' in that same 'IAW' and have long since lost any real veracity or in some cases coherance as theoretical writings let alone curatorial statements or overviews.

We here in Nottingham have some recent first-hand instances of this I.A.W. Gobbledygook thanks to our sudden emergence into the IAW thanks to Nottingham Contemporary. As our provincial minds sink in the flood of propaganda we are about to be verbally lashed by maybe it a good point for some circumspect analysis of this phenomena.

Phase 1: I graduated from Hornsey college of Art London (Middlesex University as is now) in 1981 and my art history tutor there was John A. Walker who has written extensively about the specifically political dimension to celebrity art as well as popular cultural connections ( Art in the Age of Mass Media 2001). At this time there was little separation between 'art' and 'theory'. Indeed it was common practice to read and absorb not only general theory but specific artist's statements. Magazines like Artscribe and Art Monthly put artist statements centre stage and along with a varied 'contextaul' studies area which ranged from contemporary poetry to applied design we were encouraged not only to think for ourselves but also to be as wide in our reading as possible. In those days notions of 'networking' and 'careerist' 'making it' were viewed from a heavily left-wing viewpoint ( Hornsey had been a scene of 'Riots' alongside actions in France in 1968 ) so much so that I do not think the words were ever used.

We were serious (maybe too serious) students with serious ambitions to create serious artworks. There was little hope of making money except in maybe the long term and we set ourselves for many years of cold, lonely debate and artmaking activity in usually sub standard freezing cold 'studios'. We did have a sense of community and a shared sense of what the 'art world' was and what was 'significant'. What was written about in Artscribe framed the debate and our sense of the 'art world'. There were few curatorial driven exhibitions to see and a hang of Bacon or Auerbach at Marlborough would be the highpoint of a summer. Serious artists shown seriously with little theoretical framing except in large Thames and Hudson or Phaidon tomes or reviews in the 'serious' press. Waldemar Janusczack, James Faure Walker, Sarah Kent, Brian Sewell, Mathew Collings...the names of those critics I remember 20 years later such was there standing....Artcribe had a 'local' i.e. usually London focus.

The art world then may have been smaller (pre boom and bust and the internet) but one felt one could get a handle of the major developments and the significant figures as they emerged. I remember seeing early shows by Doig and Julian Opie. Indeed I even ended up as a figure in a Gilbert and George photo piece. This was pre Goldsmiths, Hirst and the collapse (in my opinion) of those values and the boom in a larger, more fashionable, successful and in my opinion shallower art world. That art world was fed, watered and bloomed under the hands of an advertising executive and there was indeed a cut off point. The change in attitudes can be dated to the Royal Academy Sensation show...soon Stuart Morgan tried to sail artscribe into 'International Art World' waters and promptly sank....he just didn't understand the Prada Bag set...

There and ever after even the hard leftists in the artworld found themselves chasing a beguiling gravy train and many acres of comment fell over backwards justifying their selling out to a capitalist driven art world on a scale hitherto unimagined. Craig-Martin at Goldsmiths and priniciples of newly business orientated Academies across the country raced to catch up and cash in. This also coincided with a boom in markets across Europe and the USA and suddenly Brit was HIP. Nobody could bare to criticise a position we so fully deserved...now we were art top dogs we could look down on others and crow....and of course objective criticism.hard criticism..was thrown out the window.

I remember attending a show in the mid 1980's where the curatorial statement ran to over a thousand words and was written in such impermeable 'academese' that nobody could actually read it. I dismissed it but foolishly did not realise the power of the word was on the march.....

Soon fellow artists were 'locating their practice' and referencing Derrida and Foucault. Indeed one friend went from rather dull printmaker to being an expert on postmodernism in a matter of weeks. The honesty and integrity of magazines like Artscribe and Art Monthly were suddenly outshone by their glossy step-children ...Frieze, Flash etc etc and countless others that spawned and drowned in their own scenes. This also coincided with the first attempts to push M.A.'s and Phd's for artists.....up until that point M.A.'s were few and far between and centred on the 'top' institutions The Slade, Chelsea and Royal College. More importantly these were heavily studio-based courses...long on practice short on theory....evn in the late 1980's one could still just paint at the Royal College like David Hockney......just....

I still have some of the copies of artscribe I would spend hours poring over..then for a few brief years before his untimely death Peter Fuller's 'Modern Painters' seemed to show a way forward with erudite well written articles by the likes of Jed Perl rubbing shoulders with informed 'outsiders' like david Bowie and poet Jamie McKendrick. I ws verbally lashed by a graphic designer who then head of Goldsmiths M.A. for even suggesting Fuller was worth reading as too rightist..the same Goldsmiths that spun a silk purse out of a sow's ear a year later with Damien Hirst......ah the irony of it all. Nothing corrupts good intentions and political principles like a hefty wad of cash especially in the Halls of Academe....

What Fuller recognised (he was a good critic grounded in an appreciation of the English Tradition especially the writings of Ruskin, Moore, Sutherland and Hockney..read 'Beyond the Crisis in Art' currently out of print) was the essential connection between an artists's writing and their art. Especially if one moved closer to the arts and crafts area of Gill, David Jones and all the way back via William Morriss to William Blake.

That tradition has never been broken it merely been supplanted by the hysterical winnying of a thousand 'on the make' mediocrities in both studio and academia. Tie-ins and stitch-ups replaced a grounded and reasoned debate. A in-depth knowledge was not needed to spurt out a trendy 1000 word review of Hirst that never delved into his fragile and lately revealed lack of knowledge of anything remotely to do with art. Like the Peter Sellers film 'Being There' all that mattered was to be in attendance at the 'Cinderella's Ball' to catch some benefits from the King's largesse. Many very good painters and theorists (equally) retreated to the shadows ...some never to return.....John Hubbard, David Blackburn, Simon Lewty, Gillian Ayres even artists with reputations as formidable as Athony Caro's, John Hoyland's or Tom Phillips' were not safe. they were all pushed form the banquet table by the greedy and Sunday Supplement friendly advertising savvy new brood....they have never left nor raised their snouts since.....Chapmans, Hirst, Emin..you know the rest....

Now there seems to be a new mood afoot where not only Aesthetics but the artists themselves may once more be allowed their rightful place at the high table of art and there a very good chance their writing a lot better than the charlatans who supplanted them.

You are so right, Shaun.