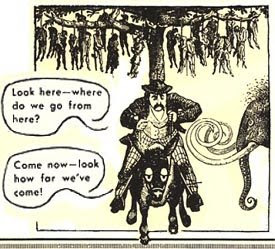 Steve Hamann and I will be doing an irregular series of cartoons and short comics on art for Sharkforum. They will primarily be collaborations between us, yet also individual pieces as well. All will be presented here in the future under the rubric Feeding Frenzy Funnies.

The first was actually already featured before the new site organization took place, as we jumped the gun in excited anticipation, in order to lampoon the Dominic Molon Sympathy show. Additionally, I did a handful of cartoons and comics as Sharkforum Funnies and certain illustrations in the past. The last several of which were also collaborations with Steve, a truly talented cartoonist and painter. However, in the future look for them under our new title.

A new one on the Consensus Academy will appear shortly, but first I want to give a quick reminder of a likeminded soul in art history's past: Ad Reinhardt.

Actually, Reinhardt is not the inspiration for our work, as both Steve and I truly came to comics out of comics. We individually grew up with, appreciated and even published comics and cartoons before we each became "fine" artists. Yet Ad can serve as an excellent Patron Art Saint to our project.

Ad Reinhardt, originally an Abstract Expressionist Painter, is an artist whose work became progressively reductivist and mystical. He is best known for his all black paintings of the 1960s. Yet Reinhardt was also a prolific illustrator, designer and cartoonist. His cartoons expound many of his artistic doctrines in a livid, yet delightfully amusing fashion. This is one of them titled "How to Look at an Artist." Several others can be found on the web, although the central website repository for them at silversteingallery.com is apparently temporary gone, due to redesign. Use Google Image Search and you can still find several of the works on this website indirectly until they make an organized reappearance. Click on this image for a much larger pop up that you can navigate with your arrow keys. 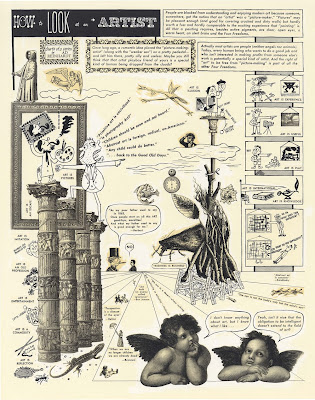 More Reinhardt cartoons should be here, and may soon reappear: http://www.silversteingallery.com/Pop_Ad.html

However, by way of the WayBackMachine (http://web.archive.org/; a GREAT resourch, by the way), I found these images still on the web, but hidden: