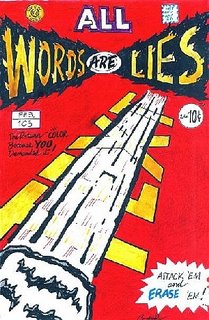 My sticker says: Hi, I'm Mark. I'm the "foreign correspondent" for a Blog/Site SHARKFORUM: Opinion With Teeth based in the US and created by artists Wesley Kimler and David Roth. Due to the success of that site in generating active critical exchange (even to the point of viscious argument), I have decided to attempt to tie into some of that energy and link it to my chief place of residence --- eastern Switzerland. I'm going to be writing for this blog about art, the artworld and related entities from the perspective of both an insider and an outsider, being a dual-citizen US-foreigner living in Switzerland.


I am an artist, art critic (Art in America, a.o.), theorist, historian and doctoral candidate with a serious predisposition for impertinence. I call it a "questioning" outlook. Others often say I simply have a bad attitude. And yet, I'm also frequently accused of possessing a persistently good mood. I think these go together well. You decide for yourself.

I left in the US in the 80s, when it appeared that there was nothing more for me in hometown of Chicago's visual artworld. In one of my recurring, sporadic changes, I had abandoned my earlier Late Conceptual Art and began pursuing the painting-installation-popular art mongrelization that I still engage in. (Although all my "directions" have dealt with the same core content and subject matter.) As I decided to abandon the Windy City, a brand of art was beginning to be enforced --- an exceedingly trendy, art magazine-derivative Neo-Conceptualism (then still linked to Neo-Geo). That, together with all the other aspects of Chicago's recurring provincialism, and a dreadful, dissolving love relationship, made me think, "Why the hell, then, don't you just go directly to that worshiped Mecca --- i.e. NYC?" I started on my way, however, then met my future wife. She is Swiss, and after an unexpected further year in Chicago, and a later year in Tortola in the Caribbean, we headed off to Europe. I have now lived in one place or another in Europe for 17 years. Whenever I live for extended periods in the US, I never seem to make it out of NYC.

I find Europe in general and Switzerland in particular to be a fabulous place to live. The artworld itself in my chosen beautiful home in the eastern part of the country is, well, another story. One which will arise here often --- and perhaps thereby change awee bit.

I still speak with a fairly Chicago accent in English, unfortunately very "cleaned up" due to conducting my life chiefly in the German language (and several dialects), all of which I speak with a heavy anglophone accent, unfortunately. I seldom speak English, or when I do, not to native speakers. Except with my Londoner Cockney pal Jonathan, whereupon we indulge our full "street" tendencies.

When ex-gallerist Paul Klein he began his on-line discussions and his plan for a Chicago Art Museum I was intrigued. While participating in his list, my interest in Chicago's art travails returned, and fascinating discussions with Tony Fitzpatrick and Wesley Kimler and others began. And Wesley's were always THE most thought-provoking, even fierce. But never accommodating. Never ass-kissing. Tough but inspiring. I wound up contributing to his Sharkforum.org site. In the past year of its existance, Sharkforum in the US, together with a podcast site Bad At Sports and other blogs, have been active in creating a new, energetic and critical scene. Let's hope this works to some extent in Switzerland as well. Check back. I hope I bring some pertinent observations to this round table.

The 3rd-person bio-blurb:
Mark Staff Brandl, an artist of the venticento was born mid-novecento near Chicago, where he lived for many years. He has lived primarily in Switzerland since 1988. He studied art, art history, literature and literary theory at the University of Illinois, Illinois State University, Col. P. University, and is currently working on a Ph.D. at the University of Zurich. Brandl is active internationally as an artist since 1980. His shows include galleries and museums in the US, Switzerland, Germany, Italy, Egypt, the Caribbean; specific cities include Paris, Moscow, Chicago, Los Angeles and New York. As a critic, he is a frequent contributor to London's The Art Book and is a Contributing Editor for New York's Art in America. He is also the curator of The Collapsible Kunsthalle. Works of his have been acquired by the Museum of Modern Art in New York, Victoria and Albert Museum in London, The Whitney Museum in New York, the Museum of Contemporary Art in Chicago, the St. Gallen Art Museum, The Thurgau Museum of Fine Art, The E.T.H. Graphic Collection in Zurich, The Museum of Contemporary Art in Los Angeles, the National Museum of Cartoon Art in New York, the Art Museum Olten and others.
Visit Mark's Web Site HERE

Good luck Mark, and everyone else. It would be great if this developed some actual running discussion in the art world in Switzerland

Mark --- As could be expected from you, with: All Words Are Lies - Attack And Erase 'Em and Say What You Mean And Mean What You Say! - Amazingly Simple To Do!, you've thrown us straight into the never ending turmoil of critical thought. Be it about art or anything else.

Amazingly simple to do?
After your overwhelming introduction it's hard not to be a bit intimidated, not being in line for the fastest writer alive title, nor having a long list of credentials to roll out. But it was nice to have been listed as a contributor even before being asked so, get the stove ready and beware of the Consensus Clique!

It's great to have you Steve --- a representative of the artworld in the French-speaking part of Switzerland, so readers know. You may not be fast, but your ideas and art are always intersting! Bienvenue!

"...a bad attitude. And ...possessing a persistently good mood"