Hans Bellmer: The Anatomy of Anxiety, by Sue Taylor, a Review 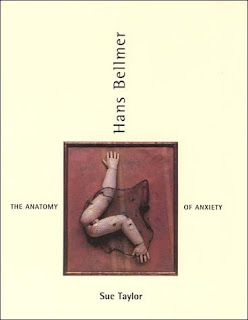 HANS BELLMER: THE ANATOMY OF ANXIETY
by SUE TAYLOR


Why do so many of us in art and art history find the art of Hans Bellmer (1902-1975) enticing? Feminists such as I expect to despise the work due to its clear and vicious misogyny. Conservatives anticipate dismissing the art because it manifestly wallows in perversion. Nevertheless, even these viewers are won over in the presence of the art works themselves — at least to the extent of admitting its theoretical and aesthetic interest. This German-born Surrealist is known for his notorious, life-size pubescent dolls and the photographs he made of them. In these works, the female figure is deformed, dismembered and threatened in ominous situations. In short, Bellmer's art is often distressingly disturbing. Sue Taylor, the author of this study, does an admirable job of analysing the conundrum one feels in appreciating Bellmer's art, with neither apologising for, nor vilifying the artist.

An art historian concentrating on modern and contemporary art, Sue Taylor received a B.A. in art history from Roosevelt University, and an M.A. and Ph.D., both also in art history, from the University of Chicago. She has taught at the School of the Art Institute of Chicago, the University of Illinois at Chicago, and Northwestern University. Taylor was Curator of Prints and Drawings at the Milwaukee Art Museum and Associate Curator at the Smart Museum in Chicago. Currently, she is a professor in the art department at Portland State University in Oregon. Taylor is also an accomplished and engaging art critic having published in the Chicago Sun-Times, Art News, the New Art Examiner and Art in America.

With the currently fashionable interest in abjection among various contemporary curators, Bellmer's work should be in vogue. It has been suggested that Bellmer may be a modern cult figure, inspiration for artists Paul McCarthy, Jake and Dinos Chapman, and others. However, such contemporary creators often seem to be manneristically copying Surrealist formulae, rather than being inspired by them, for the superficial purpose of simple shock effect. This all the more drives us back to the raw and fearful power of Bellmer's work.

There is an art historical precedent for Bellmer's dolls, which he acknowledged and which Taylor discusses. Expressionist Oskar Kokoschka commissioned a doll in Berlin in 1918, intended as a simulacrum of his former mistress, Alma Mahler. The great difference between these two artists lies in the fact that Bellmer visually accentuated his dolls' artificial status, making his position far more intricate and perplexing.

Taylor's remarkable book helps to elucidate the wedding of attraction and repulsion in Bellmer's work by drawing on psychoanalytic theory, while questioning the artist's own psychoanalytically informed interpretation of his art. Bellmer presented himself as an exemplary case of the Freudian Oedipal son. Taylor suggests that his attitude was far more complex, involving feminine identification. However, she is not an apologist for Bellmer's misogyny. As the artist's own declarations reveal, using psychoanalytic theory to interpret him is intricate. Bellmer often displayed his own familiarity with Freud, forcing one to wonder how much of his artistic approach involves the conscious manipulation of Freudian themes.

Unfortunately, as in most studies influenced by Freudian theory, many other facts of Bellmar's life, especially wider sociological ones, are somewhat disregarded as possible explanations or influences. Subjects touched on only lightly by Taylor include the artist's admitted alcoholism, his childhood in Germany during the First World War, his being labelled as degenerate by the Nazis, his emigration, the death of his wife, and others. Freudian theory in the scholarly world at large is in dramatic decline. Perhaps in response, psychoanalytic thought seems to have erected its last line of defence in the quasi-scientific domain of art and literary theory, fields which seldom demand rigorous concrete or logical proof. Although Taylor is an avowed proponent of Freudianism, fortunately for this book her feminist suspicion of master theories and her high standard of scholarship wins out. She quotes one of Donald Kuspit's alternative, post-Freudian yet still psychoanalytic definitions in her discussion of fetishism. For art historians attracted to the psychoanalytic, including Taylor, Kuspit's notions of idiosyncrasy, maturity and health could offer a liberating future inspiration and source. It fits particularly well with Taylor's own predominant approach in this book, wherein she extends earnest, sympathetic thoroughness within a sceptical frame of thought. This Denkmethode rises above her forays into standard, classic Freudianism (primal trauma, castration complex, and so on).

Bellmer's work does beg for psychoanalytic interpretation of some strain. From the early 1930s in Germany until his death in Paris in 1975, the artist steadfastly remained occupied, if not obsessed, with sexual subject matter. His frequently repeated assertions of father-hatred may seem suspect, yet the neurotic repetitiveness of Bellmer's pornographic representations suggest captivity in compulsion. Taylor sees in this masculine anxieties inspired by the female sex, repressed homoerotic attachment to his father and a attendant sense of guilt and fear. She proposes that as a result, the artist internalised an identification with women , which brought on all the disquieting aspects of Bellmer's art. Furthermore, this paradoxical combination of the objective and subjective, the feminine and masculine, empathy and attack, is what creates viewers' simultaneous attraction to and repulsion from his art.

Pointedly, Taylor has commented in an interview that she chose to avoid the congratulatory term erotic, choosing to clearly describe the work as pornographic. Whereas she initially "set out to take revenge on him", she came to realise that Bellmer was "a thoughtful, well-read, and sensitive individual, a real intellectual." In her research, she came to "admire his conception of the artist as an 'anti-specialist,' as he put it, interested in poetry, engineering, carpentry, psychiatry, psychoanalysis, and more." Taylor also discovered that "the women he attracted were remarkable". She comments that she "tried to give voice to these women in my book, to take seriously what they had to say about Bellmer." Her book does this extraordinarily well, and thereby imparts an entirely new and intriguing discovery concerning his art, adding credence to Taylor's claim that Bellmer's work contains as much identification with the feminine as abuse of it.

This alone would make Taylor's book praiseworthy. However, there are several further reasons to read this book. First, the book causes one to personally ponder the question of the combined attraction and repulsion of Bellmer's art. Second, Taylor has a genuinely readable writing style, graceful conveying her solid scholarship. Third, some of the photos are published for the first time and the book includes valuable texts by Bellmer previously unavailable in English. Finally, and most significantly, Taylor has accomplished a bona fide critical achievement, born of scholarship, poststructuralism and feminism. She combines detailed aesthetic evaluation with the "hermeneutics of suspicion" into fresh comprehension and appreciation of Bellmer's art, thereby offering a new and more balanced understanding, one never ideologically simplistic, but rather complexly heterogeneous.