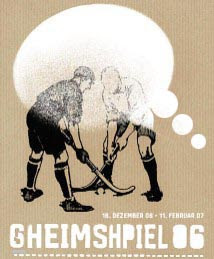 HEIMSPIEL 06 - A DISASTER AND AN INSULT


Okay, I've now been through the so-called Heimspiel Exhibition of 2006 several times with varying company. Let me say what everyone is whispering, but not openly proclaiming: This is one of the WORST exhibitions I have every seen. It is predominantly third-class, minor-league variations of Curatorially Correct trendy artworld nonsense. Or when one sees a good artist, such as Katja Schenker, she is poorly presented. There are a handful of exemptions, such as Marianne Rinderknecht, but interestingly these are primarily from the "real" Heimspielers (i.e. they actually live in the area the show is purported to be about and have something to do with the art scene there). This review is short. Too short. But sometimes, perhaps, a review's length should reflect what amount of discussion an exhibition deserves. More later --- or quite conceivably not.

What is clearly need is an OPEN and clear discussion of what is needed, what must be done to create a REAL exhibition of Ostschweizer Kunstschaffenden, Artists of Eastern Switzerland. Such shows as the current one, and most of the others before it (where my art was often present) are and were nothing more than veiled insults to artists living and working here. These shows must exist in the service of the art created here, so-called regional art, not as curatorial tools to insult the same. It all has certainly NOTHING to do with Josef Felix Müller's, and the rest of us who worked with him, original idea when the show was founded. Visarte-artists, independendants, Exex-ers, and others need to get together and come up with an AUTHENTIC, positive, Ostschweiz-art-bolstering conception of how to do such a show. This show can sink no lower.