This is an article I wrote long ago, Spring 1988, for the publication Chicago / Art / Write, for editor L.J. Douglas, (founding editors William Conger, Richard Loving and Frank Piatek). I just rediscovered it and as it has never been online, and I found it still pertinent to my thoughts and to art now, I thought I would upload it. 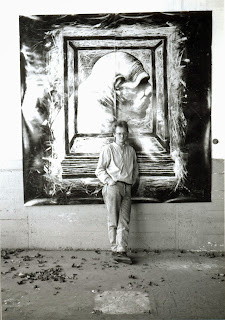 A photo of me in front of one of my paintings from several painting-installations at that time, 1988.

What constitutes representation, or rather what constitutes representation in a work of art? Discussions of this usually begin with the tale of the ancient Greek painter able to create a work so convincing that birds would attempt to eat the depicted grapes, and include a discourse on the original Greek word mimesis, linking it to imitation. Because our terms for representation commonly stem from this, we can be led into certain areas of thought. But none of the available translations are fully accurate, so I shall bypass this rather than be bogged down by obtuse argument.

There are arts that embrace representation and those that do not. The intrinsically representational arts are literature (including poetry, prose, and drama), the visual arts (including painting, sculpture, photography, and film), and, of course, other arts close to or between these areas, such as performance, comics mixed media, and intermedia. That favorite metaphor for abstract painters, music, is an example of an art which resists representation. For obvious reasons I am not discussing this last category and, owing to personal predilection, I want to discuss only the visual half of the former.

The representational nature of visual art is one of its most important, fruitful, and intriguing elements — yet for very particular reasons. It is amusing that we always speak as if illusion were truly possible in art. An argument can be made that this deception never genuinely occurs. We never mistake art for reality. The disinterestedness of the aesthetic attitude, as philosophers say, disallows this. To aesthetically perceive anything is in fact not to be "fooled" by pretence. We neither bump our noses trying to walk into Richard Estes paintings, nor rush about attempting to save the victim of a Hitchcock movie from harm.

The viewer is not over-distanced, of course: I might get tears at a tragedy, and frequently an excellent painting sends chills of excitement up my spine. Response to a work of art is in fact multilayered and complex. Art demands a synchronous, contrary, almost oscillating attention. I view a work both entranced and consciously considering the skill of the image or artifice. As an example, trompe 1'oeil, "fool-the-eye" painting, is ironically the opposite of its supposed intent. Our whole attention is riveted by the accomplishment of the artifice, which gives us the thrill. It in no way deceives us. If trompe 1'oeil wished to trick us the only successful pieces would be counterfeit bills. There is always the danger that simple emotional escapism can preclude moral involvement and analysis of larger context; Bertolt Brecht shared this concern, as is evidenced in his attacks on theatrical illusion.

What makes an image a representation of something? How is it a "picture?" Just because the artist intended — or we presume that he/she did — a work to be a representation of something, is it? Because the artist looked at a tree while in the act of painting is that why the .piece then bears the image of a tree? If I notice that a picture reminds me visually of a human's face, is it a portrait? These points may be of interest in the process of the artist, but it is obviously untrue to ascribe to any essence, or interest, of representation itself. Furthermore, I am not talking about "figurative" art, genre, or simple naturalism. Representation must go beyond that; we must consider the inclusion of history, meaning, as well as our abilities and inabilities to recognize it.

There is a famous scientific anecdote of chimpanzees able to recognize photos of themselves, yet certain humans who had never previously seen photographs were unable to do so. Even so-called primitive or traditional societies have highly sophisticated systems of representation that filter their vision. The convoluted modern "naive" theory is that if an image somehow resembles a photograph of a certain object —  discounting certain aspects of photographic vision (such as out-of-focus) — then it is a representation of that object. This points, through its obvious illogicality, elsewhere. The point is that representation is largely a matter of social convention. As symbol shades into "picture" and is culturally dependent, I can only see representation fully realized and most pregnant with meaning, as concretized belief. By this I mean ideology, although-I hesitate to use this-current buzzword, or more accurately Weltanschauung ("world-looking-at," "philosophy-of-life") and Weltbild ("world-picture"). Flippantly, I might say that representation represents itself. This is not circular like a formal tautology, such as "what you see is what you get." A picture of the world, or some .element of it, is a rich evocative arena. A picture is open to critical interpretation and bears the weight of previous and current assumptions concerning the uses (and misuses) of similar images. Because of this we only see through conceptual skrims. Our knowledge of an image is a knowledge of the conditions inherent in that image. For instance, representation from the past reveals to a greater or lesser extent the superstructure of the society that produced it, which is of course related to other elements such as but not limited to the economic base. It also reflects, whether intentionally or not, the mores and values of the people and  society out of which it arose.

Jan Van Eyck's painting fully depicts both the religiosity of his time and -the rising antimedieval materialism that was to eclipse it. Oscar Schlemmer's work proffers his period's hope for a grander future, yet also portrays the dehumanization it wrought. It is credible to postulate that much of our understanding of visual art is through its ability to give direct expression to the sense of shared humanity. But the strongest works are those that sustain the most complex responses, like life. Therein lies the presence and vigor of representation: Works of art can be made for interpretation, cognizant of their status, associations, and cultural situation. Artists have the ability to wield considerable power through their manipulation of the multiplicity of references, technical aspects, emotions, and intellectual assertions of representation to delineate the truth of our experience.