Paul Germanos on his blog "Chicago Artworld" did an interview with me, as he has with a group of Chicago-artists-who-left-Chicago. Here it is! Link

Paul Germanos: Hold old are you? Where are you from? When did you come here? Is Chicago one of many stops on your journey?

Mark Staff Brandl: I just turned 60! I am an artist of the venticento, was born, mid novecento, in 1955 in Peoria and went to high school in Pekin, Illinois. I visited Chicago a lot as a child and after my initial studies moved there in 1980. I immediately fell in love with the city; Chicago is my hometown in my heart till this day. I left in 1988. Since then I have lived with my Swiss wife Cornelia in several places around the world including Tortola in the Caribbean and have lived primarily in Switzerland.

More about me: I am an associate professor of art history at the Kunstschule Liechtenstein and Schule für Gestaltung in St.Gallen, Switzerland. My shows include galleries and museums in the US, Switzerland, Germany, Italy, Egypt, the Caribbean; specific cities include Paris, Moscow, Chicago, Los Angeles and New York.

As a critic, I've been a contributor to London’s The Art Book, Sharkforum on-line, a podcaster for Bad at Sports, a Theory Editor for Chicago's Proximity magazine and a Contributing Editor for New York’s Art in America. I am also the curator of The the Kunstgrill and the Collapsible Kunsthalle. 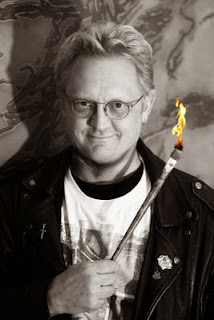 PG: For what did you hope when you came to Chicago? A degree? A job? What did you think that you'd find here? What was your first impression of the city?
MSB: I began to have many possibilities to exhibit my work around 1980, so I left graduate school and moved to Chicago. I went to Chicago for the artworld. I also quickly got a job building exhibitions, dioramas and the like at the Field Museum of Natural History. Among other things there I was deeply involved in or built with my co-worker friends are the Eskimo house and the Egyptian hall, especially the Mastaba.

At first the artworld was great, with N.A.M.E. Gallery, ARC/Raw Space, Artemisia, Randolph Street Gallery and on and on. Many Kunsthalle-like places to show experimental work. There was a real feeling of breakthrough in the air, the very beginnings of Postmodernism, with amazing artists like Raoul Deal, Wesley Kimler, Michael Paha, Tony Fitzpatrick, Gary Justis, Jeff Hoke and me getting lots of attention. That changed later and is one of the reasons I left.

PG: How long were you in practice here? Did you enjoy success on your own terms? Can you recall some peak experience? If you felt frustrated, what frustrated you? Poor sales? Lack of publicity? High rent? Crime? Inefficient transportation? Public apathy? Bad weather? What was the total amount of time that you spent as a resident?

MSB: My career as an artist began in Chicago. I must be a Chicago artist in my soul, for as Tony Fitzpatrick's daughter Gabrielle mentioned when we got together in Florence, Italy recently, I still have a Chicago accent in English. I got lots of media attention for my art, sold well, won some awards, was listed as best installation of the year (or something like that) in The New Art Examiner once for a Raw Space piece. And so on. It was going upward, but as you know art careers have ups and downs. I found Chicago's music, literature and comic art world's wonderful. I believe Chicago is a wonderful place to live; my wife loved it too in the year she lived there, and misses it: those amazing neighborhoods, the food, the various ethnic groups. Art too. The Artists. But not it's artworld.

MSB: I suspect that my rather wild lifestyle was more notorious than my art at the end of my "welcome" in Chicago ( I have since settled a bit.) I think as an artist, especially pre Neo-Academicist-Conceptualist Chicago days, I was and am known as a somewhat too abrasive, rebellious intellectual. Someone who is insufficiently sophistically behaved. A highly critical conceptual painter, a mongrel addicted to art, personal freedom, philosophy, painting and several vernacular arts, including comics and sign-painting. 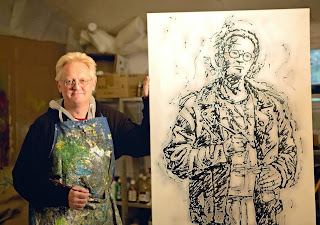 PG: Was there an event which precipitated your departure? For which other city did you leave? What was waiting for you in that other city?

MSB: I left at the end of the 80s, when it appeared that there was nothing more for me in Chicago's visual artworld. In one of my recurring, sporadic changes, I had abandoned my earlier Late Conceptual Art and began pursuing the painting-installation-vernacular-art mongrelization that I still engage in. (Although all my "directions" have dealt with the same core content and subject matter.)

As I decided to abandon the Windy City, a brand of art was beginning to be enforced --- an exceedingly trendy, art magazine-derivative Neo-Conceptualism (then still linked to Neo-Geo). The SAIC Kirshner-Klan as we called it then. That, together with all the other aspects of Chicago's recurring provincialism, and a dreadful, dissolving love relationship, made me think, "Why the hell, then, don't you just go directly to that worshiped Mecca --- i.e. NYC?" I could see that Chicago was once again strangling its own creativity and would fade, as it indeed did, from Second City to Third, as LA was up-and-coming --- believing in itself!

I started on my way, yet then met my future wife (in the kitchen of my studio, strangely enough, due to a Maxtavern connection). She is Swiss, and after an unexpected further year in Chicago, and a later year in Tortola in the Caribbean, we headed off to Europe. I have now lived in one place or another in Europe for 27 years. Whenever I live for extended periods in the US, I never seem to make it out of NYC.

PG: (a) Does Chicago look different to you since your arrival to it and/or departure from it? Do you have advice for someone about to begin what you've finished? (b) Do you expect to maintain a connection to Chicago and its art world? What's your incentive to stay connected? Have you left friends or family here?

MSB: (answering both questions) Said a bit too roughly, Chicago is a great place to be from. To be FROM. Leave it. But keep up contacts. There are great, creative people there like Lynne Warren, Paul Klein, Bad at Sports, and so on. But Chicago is too provincial. Chances are better elsewhere. Provinciality is best construed as a state of mind, rather than one of geography. Once upon a time, provinciality consisted of knowing nothing of the world-at-large, only looking at local art and culture. Now that has inverted. The new provinciality is a form of consensus globalism, where you are always looking elsewhere, copying New York or the Biennale or documenta and never really looking at the great art occurring around your own corner.

I stay connected because I know that outside of the boring consensus-correct art, there are always wonderful artists creating unique, original, personal work in our city. Think of Chicago's theatre scene, literary world, and rich music, especially Blues, history. The same is true for visual art. Or can be.

PG: By what means do you stay abreast of developments in the arts in Chicago? Print? Social media? Visits?

MSB: Internet! Visiting, etc. From Sharkforum to Bad at Sports to emailing and facebook.

PG: In the end, is place important? Is physical location a matter of consequence in 2015?

MSB: For your day-to-day life, yes. But not really for art. A curator of a Kunsthalle told me in discussion that I had forgotten that it is the duty of curators in provincial areas to educate the local artists through confrontation with influences from outside. This is completely idiotic. Such "instruction" is totally unnecessary in our globally networked society. Most of us who live and work outside the few urban centers for culture immediately know everything that occurs in them. Normally, I have seen what is happening in New York City directly there, and Zurich, and Berlin, and London, and Florence and Istanbul, and more. And then 8 to 10 years later I am "instructed" about it? This teaching consists mainly in telling us which curatorially correct and momentarily accepted tendencies we should kow-tow before — something of a "Top o' the Pops" for the artworld, or even more banal, "Art World Star Search." As the artist Alex Meszmer opined, behind this lies the attempt to achieve "a little piece of Documenta, or New York, finally in every province." This thought process is what destroyed the originality of much of Chicago's art scene.

PG: Was some important subject omitted from this query? Please introduce any additional material which you believe to be relevant.

MSB: Artists in Chicago: if you do not leave, you can do something even more important. Start and maintain your own artworld, artvillages. Be antisophistic; stop being apparatchiks in your own "dissing." Cooperate with other artists. Ignore the current gatekeepers; they too shall pass. We will not. Art is a huge, millennium-long discussion among artists. The others are listening in. We can welcome them, but stop letting them dominate.

In the whole artworld, but clearly so in Chicago, we are in an academicist, mannerist situation that both artists and curators should rethink. Encourage self-reliance and the acceptance of responsibility on the part of artists, primarily, but also the rest of the Chicago artworld.

Learn more about Dr. Brandl and his work by visiting his website: http://www.markstaffbrandl.com/

This article has been presented in its entirety, unedited.
Posted by Mark Staff Brandl at 1:23 PM