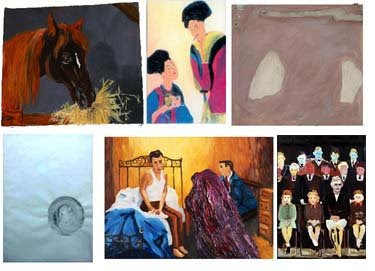 I’d like to introduce a new term for a recent trend in Consensus Correct painting: Feeble Painting.

Actually, I already have been using it for a short while in my Art History classes when describing one current tendency. While discussing this with the Shark, he volunteered to help me delineate it and present it to a wider audience. We debated the idea in depth and here is the elucidation.

Many of us in the artworld have used various related terms, especially fine is Bad At Sports’ Duncan McKenzie’s own “Shitty Drawing.” However, this tendency has expanded out of the realm of bad drawings and crappy installations into paintings largely influenced by both of the aforementioned.

As the Shark aptly describes the paintings we are discussing here, they are by “the we hate paint but we still do it consensus crowd.”

I find Feeble Painting to be a recent concocted form of painting custom-made for the video-and junk-installation-curator crowd, the ones who until recently swore adamantly that painting was dead. Slowly becoming aware that it was not, and that they would have to live with some form of it, such people have latched on to something they can readily understand, a form of painting requiring no concentration and no “eye” whatsoever. One, in fact, in which such abilities would be detrimental. My friend, the late Charles Boetschi, an amazing geometric abstract painter, described this work as that “which is made quickly with one hand while doing what is far more important with the other, cell-phoning an international curator to arrange to do lunch.”

Leaving malice aside for a moment, this Feeble Painting is indeed the logical outgrowth of an art school system that worships deskilling. The attempt to raise Shitty Drawing and garbage installations to a new level. Painting deriving unmistakably from the video art, “anybody-who-buys-a-camera-can-do-it” attitude. Art mistaking “dumbing down” for democratization. It probably traces its ancestry all the way back through a misunderstanding of Picasso’s anti-academic techniques to Gauguin’s Rousseauian rejection of received knowledge. Nevertheless, I place no blame on them, for these older Modernists’ rejections were revolutionary actions, not groveling, as Feeble Painting is.

Feeble Painting is painting which fetishizes its own impotence, its own lack of power, presence and capability. It is the ultimate Late-Modern-Postmodernist misery. The Endgame, necrophilia, nihilism, and self-hatred played out in endless slow-mo loops.

I had to create a term originally simply for the file into which I put the images of such work for my Art History class. At the end of the year when I reach the present, more or less, I cover the end of Modernism around 1979, progressing easily into the first (and then promising) forms of Post-Modernism (then still hyphenated): Feminist Art, Pattern and Decoration, New Image, Neo-Expressionism. Then I segue without difficulty into the short wave of Neo-Everything (Neo-Surrealism, Neo-Romanticism, etc.), the theoretical bombshell of Neo-Geo, which quickly became dominated by its Appropriation wing, then continue into the academizing of that trend into Neo-Conceptual Art, its ascendancy to Consensus Tyrant, the quiet yet solid rebirth of painting through Conceptual Painting into New (Medial) Painting — and then I have a problem. At that point, the artworld is split into warring strains, much as it was in the heyday of Neo-Classicism and Romanticism.

On the “positive side” the New Painting continues to develop in two directions out of its founders (such as David Reed, Jonathan Lasker, Mary Heilmann and others). One, a new painting based in abstraction but incorporating certain new medial concerns, yet one conscious of the importance of painting. The second, a form of (post?-) postmodern painting utilizing certain forms of representation as well as abstraction,. That is not the problem.

The predicament arose over what to call another form of painting which arose, which I suspect was indeed concocted, by the Neo-Conceptual Consensoriat, the PoMo Academy still in power. It saw it had to deal with Its Great Enemy in some fashion, thus sought to arrogate and pervert it into something controllable. A form of painting wallowing in its own insignificance. This was attempted at first with so-called Radical Painting, a form of monochrome, but those artists generally tended to really believe in their discipline. O, heretical lack of insincerity.

Thus the Censensoriat began to engender Anti-Painting Painting. Yet so cumbersome a term is difficult, and suggests work which could be even more moving than what it actually has become: work eschewing all interest, work wallowing self-abnegation, etiolation and even self-hatred, (for career success). In order to show this to my classes, I sought out images of such art, ones wherein the purposeful deskilling of the work reflecting its relationship to the already existent “bad drawing” term, and its fetishized helplessness. I required a new term, as it was painting, not “bad drawing” anymore. I think Feeble Painting as a term fits the bill exactly. In truth, it even is not truly derogatory, rather keenly description.

Who do we mean by this concretely? There are Feeble Painting artists of both the representational and abstract persuasions. Most of those presented in posts below about Consensus Stars are in this school. A quick list of examples would include Peter Doig, Marlene Dumas, Elizabeth Peyton, Caro Niederer, David Chieppo, Karen Kilimnik, Raoul De Keyser, Rodney Graham’s paintings, much of Judy Legerwood, about half of Günther Förg, and others similar.

“Feeble Painting” : a movement of academic, mannerist Neo-Conceptual thought as applied to the making of paintings. One emphasizing a lack of technical ability, fetishizing the medium of painting’s presumed death and insignificance in images of ironic incompetence merged with kitsch. Weak, anti-painting painting.

Feeble Painting. Please use this term!
Posted by Mark Staff Brandl at 12:37 PM

BAD BOY YOU ARE; MARK! I THOUGHT ABOUT A POSSIBLE TRANSLATION INTO GERMAN AND HERE ARE THE RESULTS OF THE JURY:

I am taking this to the extreme - my next painting show will consist of 12 badly painted (feeble) canvasses which will have the words STUPID ARTIST painted on top...as this supposed 'important' show funded by the feeble arts council Uk it should annoy a few people which exactly as I intend :-)