Belcher, UK: The Art of Greed 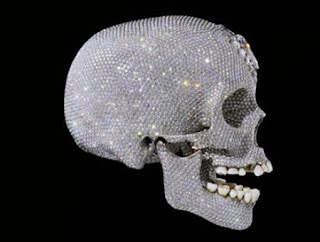 Following an excellent Clive James article on Hirst’s Skull on BBC website I was moved to post a short reply…I elaborate a little more here..

Cracking riposte Mr. James. Mr Hirst is the Barnum of our age and whilst not being a bad lad and kind to his mum he does produce some silly artworks. Even sillier is the stage-managed way he hoovers up press via his agent. Fair play in the kingdom of the skull the one-studded man is a chav. My friendly art dog has seen through the media fog for many a day mainly because being a dog he cannot converse with Mr Hirst in case he rips him in two and drops him in a tank. Unfair treatment of a critic but that’s the way life is these days. Would it be unwise if Moogee suggested that if current proportion of illegal diamonds on market as high as suggested then most of the sparklers on this Pearly King’s bonce are dodgy anyway?

Having re-read an Observer interview with Mr.Hirst’s ‘agent come bookie’ Frank Dunphy I have to eat my words. As a double act Mr. James’s comments on Morecambe and Wise and celebrity come much closer to the truth than he imagines. Mr Dunphy ex-bookie, Irish scallywag and theatrical agent to several dwarves, a python lady , Harry Worth( true talent) and The Nitwits( don’t ask but they cleaned up in Vegas apparently) is the real Barnum here. Fraud is the key. It is no longer anything remotely to do with art or even the trailing in his jetstream Jay (Etonian) Jopling who probably looked sadder than Mr. Cameron after a by-election when he realised said skull cost more to make (let alone sell) than his entire ‘White Cube’ gallery. How appropriate that it is the name of the gallery that signifies all that wrong with contemporary art culture. A white space devoid of feeling and intrinsic merit that reflects back contemporary obsessions with the vacuous, the fleeting and the vain. To that degree Hirst has produced an object of its time but that time as Warhol predicted used to be 15 mins..it substantially less …ask the Big Brother clone lapdancing for footballers how long she expected to ’cut her teeth’ on the lush pile carpets of instant glamour before returning to the barmaid role…

One White Cube is another mans Sugar Lump. Publicity for Jopling to keep him in his loft conversion or is it stockbroker manse? Publicity for dull-witted hacks on a hundred lifestyle mags to fill column inches instead of having to either read, investigate or think. Disposable culture bred on internet searches and generic theme writing born of laziness and bad teaching. The roots of our present malaise stretch far back into the teenage bedrooms and back of class Hello and GQ obsessed teenagers who have been coached in lifestyle living instead of values, grammar or numeracy.