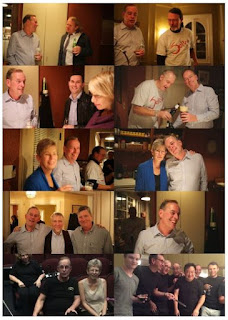 When reflecting on the passing of our dear friend Emil, I can’t help thinking of the character Arkel from Maeterlinck’s libretto Pelléas et Mélisande. Near the beginning of the story, Arkel professes his belief that nothing happens in life without a reason, and near the end suggests that we all crave beauty alongside death. These two moments sum up my relationship with Emil to a tee. Fate clearly had a hand in our first meeting in May 2012. Ralph Kuncl, Provost of the University of Rochester, invited us both to an event celebrating the release of books by faculty authors. Instead of talking about my book, I used my two minutes at the microphone to plug TableTopOpera’s upcoming performance of Debussy’s opera Pelléas et Mélisande. I mentioned that we were using images from Craig’s comic book version and that Craig would be coming to see our performance in Kodak Hall. As I soon as I finished my pitch, Emil bounded up and introduced himself. He immediately quizzed me about Craig: “The real P. Craig Russell?  The one who did Elric, Dr Strange, and Sandman 50 “Ramadan”?” I gulped, not having the slightest clue what he was talking about, and replied: “Yes the real P. Craig Russell. The one who did Salome, Ariane, and The Ring!” We spent the rest of the party chatting and promising to contact each other at some later date. My friendship with Emil blossomed and,  thanks to Emil’s savvy, TableTopOpera went from strength to strength: the group received two grants from the U of R’s Humanities Project to complete two more projects with Craig—Salome (2014) and Ariane and Blue-beard (2018). The latter was so successful that Laurence Vittes declared TableTopOpera “the world’s greatest 8-member operatic comic book ensemble.” Emil was also thrilled to collaborate with Joy Calico on an essay for Opera Quarterly (2015) about our production of Salome and even more ecstatic to sign a contract with Indiana University Press for our new book ‘Ariane & Bluebeard: From Fairy Tale to Comic Book Opera.’

Arkel’s other remark—about craving beauty alongside death—particularly resonates with our four shows for the Rochester Fringe Festival. One of the qualities I most admired in Emil was his sense of humanity: he had a clear moral compass and a strong desire to help others, especially those in need. Our Fringe shows allowed this sense of humanity to shine through loud and clear. He was pleased as punch when Jeff Spevak described them as “the thinking person’s entertainment.” And he beamed when Mona Seghatoleslami offered the following appraisal of Scarred by the Somme: “Another dark and difficult one: this show combines music by Claude Debussy and Igor Stravinsky with history and imagery of war, focusing specifically on the 100th anniversary of the Battle of the Somme. TableTopOpera does some of the best challenging, artistic work using classical music in the area; their projects have all been fascinating, including their comic book opera presentations and last year’s Songs on the Death of Children, combining Mahler’s songs with issues of child poverty and mortality.” The latter show was particularly dear to Emil’s heart since it allowed him the opportunity to show off his amazing chops as a translator, in this case recasting Rückert’s haunting poetry into English. Although Emil enjoyed working on every project with TableTopOpera, he was especially fond of our treatment of the last song. He really loved Bert Hardy’s stunning photograph of a schoolboy leapfrogging over a headstone in a Glasgow cemetery:  he regarded it as the perfect celebration life over death. Emil, you will be sorely missed.