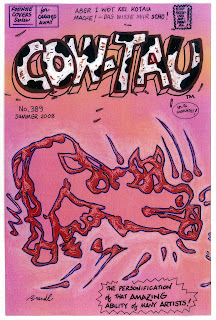 Similar to the totally unexpected collapse of Communism in the years around 1989, a complete rearrangement of the power structure in the world of fine art was announced today.

The rapid and unexpected collapse of the Communist systems of the Soviet Union and Eastern Europe continues to mystify scholars and citizens alike. A parallel phenomenon seems to have occurred today. All curators in a massive guilt-ridden attack of moral conscience have simultaneously renounced all claims to leading, directing or educating the artworld. They have decided to return to what they do best, if agonizingly --- fundraising, aperitifs and putting up with difficult artists.

To prove the point, the next directors of Documenta, the Venice Biennale, the Whitney Biennial and all other large "top o' the pops" art exhibitions will be presided over by practicing artists, with curators as assistants. Additionally, the curators have enforced self-disciplinary measures in collaboration with art critics. In the future, speeches at art openings will be less than 15 minutes, only one speaker will be allowed and the content will not consist of telling viewers why the work is so important even though they don't like it. Reviews and catalogue essays will never have more than one reference to Derrida, Lacan or Nietzsche per paragraph. Furthermore, all curators and critics have promised to take creative writing classes under well-known authors and editors in order to learn how to actually compose essays. This will include meetings in a newly founded group "Clichés Anonymous," following a 12-step plan for the abstention from delusions of dictatorial control. A special sub-group has been founded for curators in the German-speaking world, focusing on a detox program helping them withdraw from the abuse of Large Romantic Abstractions in writing.

Collectors have voluntarily joined in, saying that their actions till now had actually been "ironically intended" anyway. From now on, instead of hiring curators to tell them what to buy for investment sake, they have decided to actually read books and visit exhibitions on their own, deciding what they like, and buying that! The auction houses have proclaimed that in a spirit of detente, they will cease attempting to replace galleries. Finally, with the pressure removed, all gallery dealers have announced that they will begin to make discoveries of new artists themselves, not waiting for curator, that they will even seek out mid-career artists, not only juvenescent ones. They also plan to form long-lasting relationships with artists.

The artists we have contacted are completely astounded and confused. Most living artists have never considered the possibility of actually having control over their world and have no plans for "Post Kowtow" as it has been dubbed. It appears many curatorial favorites have already committed suicide. Various artists have openly admitted to considering giving up brown-nosing on the one hand and whining on the other.

Oppositely, however, in other news, the world of stand-up comedy has decided to take over where the previous artworld left off. From now on, comedians will not appear on TV, other than as assistants. Instead, agents and managers will take their place. In place of comedy routines, these "comedy facilitators" will discuss the ways in which they arrange for comedians to appear. Or did so, previous to the change, that is. According to one former 10-percenter and now star, this will "result in a far more critical, deconstructive and analytic comedy-world." He went on to quote Foucault, Derrida and Nietzsche.