1965-2006. Neo-Conceptual Installation artist Jason Rhoades died of heart failure on Aug. 1 in Los Angeles at the age of only 41.

Rhoades was born in 1965 in Newcastle, California. He studied from 1985 - 1986 at the California College of Arts and Crafts in Oakland, California; received his BFA after studying from 1986 - 1988 at the San Francisco Art Institute; continued his studies in 1988 at the Skowhegan School of Painting and Sculpture and received his MFA after studying from 1991-1993 at the University of California, Los Angeles. The artist was a student and the chief protégé of fellow-artist Paul McCarthy. They collaborated on an installation at the 1999 Venice Biennale. He was represented by several important international "tastemaker" galleries including David Zwirner in NY and Hauser and Wirth in Zurich and London.

For many people, Rhoades was the epitome of the trendy neo-mannerist, academic artist. He used all the curatorially-correct materials, forms, references and attempted-shock techniques (including human excrement, obscene words, sex events and so on). Nevertheless, although he was somewhat similar to and in the league of other Neo-Con artists such as Jeff Koons, there was none of the pushy Yuppie to his personality. As a person, Rhoades could be quite appealing, with more of the air of the cheerful, pudgy ex-high-school-nerd seeking to shock, than of the art-star wannabe as is so common among his style-compatriots. Under all his boilerplate Dada was a fun sense of humor and even self-effacement.

His most famous exhibition in Europe was an immense, museum-filling installation titled My Madinah: In Pursuit of My Hermitage in the Hauser and Wirth-funded Lokremise in St. Gallen. Rhoades packed the space with 1724 colorful neon signs each forming a different euphemism for the female vagina, thousands of old carpets on the floor and various small crystals and cheap wooden camel-shaped souvenirs all covered in tons of splattered hot-glue from a very ejaculatory glue-gun. After the closure of the show, the work was intended to be rebuilt in a new building in the desert near Mecca California. When I last talked to him in June at the Basel Art Fair, Jason told me that he was buying up junk truck trailers and intended to build the housing in Mecca from them. Let's hope that the California permanent installation of the work does come to pass in some fashion, as I believe it is his best work, truly exhilarating and delightful despite the customary "shock" elements.

I saw Jason about twice a year and always enjoyed seeing him and discussing art with him, even with certain reservations I had about aspects of his work. He has a Cover painting of mine made as a lighthearted homage to him and other "Large-Glass" aficionados. I believe he was really just beginning to be himself as an artist, notwithstanding or because of all the immediate fame he had, thus making his early death even more distressing. 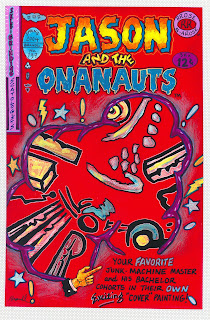 He is survived by his wife, the artist Rachel Khedoori, and a child. My thoughts and condolences are with them.
Posted by Mark Staff Brandl at 10:37 AM