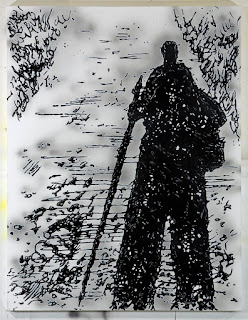 Here is  one of the paintings in my upcoming Zurich installation. It is of me walking/hiking out of the Black Forest, as well as my dissertation. My shadow, holding two treking poles, only one clearly visible.

Posted by Mark Staff Brandl at 10:25 PM No comments: 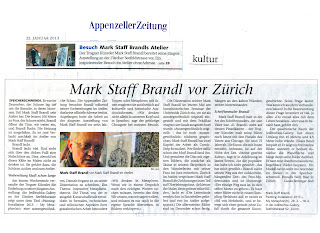 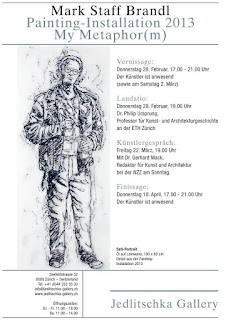 It is finally the time! After some years in the making, the room-filling painting-installation based on my PhD dissertation is opening at Jedlitschka Gallery in Zurich. You are cordially invited to the opening, I’d love to see you there.

Discussion with the Artist:
Friday 22 March, 7 pm
with Dr Gerhard Mack,
Editor and Critic for Art and Architecture at the NZZ am Sonntag

Posted by Mark Staff Brandl at 10:21 PM No comments: 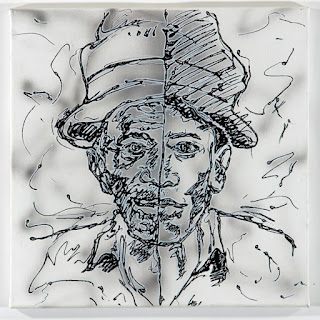 Here is another painting from my upcoming installation in Zurich. It is of Eshu, the spirit of the crossroads in Yorùbá. Also known as Èṣù, Legba, Eleggua and identified with St. Anthony of Padua, Saint Michael or Santo Niño de Atocha in Santería. Èṣù is a spirit of Chaos and Trickery, and plays frequently by leading mortals to temptation and possible tribulation in the hopes that the experience will lead ultimately to their maturation. He is both young and old simultaneously. In my PhD dissertation I replaced the metaphoric figure of Oedipus with Eshu in my rewrite (misprision) of Harold Bloom's theory of misprision.
Oil and enamel on canvas.

One of Eshu's patakis or stories of the faith: "Eshu was walking down a road one day, wearing a hat that was red on one side and black on the other. Sometime after he entered a village which the road went through, the villagers who had seen him began arguing about whether the stranger's hat was black or red. The villagers on one side of the road had only been capable of seeing the black side, and the villagers on the other side had only been capable of seeing the red one. They soon came to blows over the disagreement which caused him to turn back and rebuke them, revealing to them how one's perspective can be as correct as another person's even when they appear to be diametrically opposed to each other. He then left them with a stern warning about how closed-mindedness can cause one to be made a fool."
Posted by Mark Staff Brandl at 8:11 PM No comments: