Clifford Meth's Welcome to Hollywood and His Sharky Response 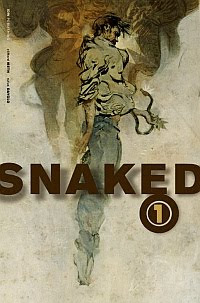 As Rich Johnston writes, "Earlier this week, writer Clifford Meth revisited his rather-abandoned-of-late column at Comic Bulletin, Meth Addict.In which he told how a project he was associated with, Dave Cockrum's The Futurians almost made it to the screen a couple of times.And how he was also hired to write a screenplay treatment for his IDW series Snaked, before being moved aside for another writer - and then discovering he was suddenly not getting paid his kill fee...

"We have a contract," I said. "Of course he's going to pay me." "No he isn't. He's pretty sure you won't sue him. The fee is too small and you'd have to fly to Los Angeles to file for damages. Apparently this is how he does things." "Tell me this is a bad joke." "Sorry Cliff," said my agent. "Welcome to Hollywood."

So Cliff describes how he offered to "talk" with the producer's parents. Whose address Meth happened to have. Which suddenly has the desired effect.The column has been pulled, after someone got a bit scared it seems. But I understand the specific column in question has been bought out by a bigger site who will be running it tomorrow.

Not Bleeding Cool, we weren't even in the bidding. But if you'd like to read the whole column now, go to Daniel Best's Blog, where it is re-posted here.
Posted by Mark Staff Brandl at 12:37 PM